Pakistani actress Yumna Zaidi is starring in an Arabian superhero web series that’ll air any day now. The series is called Crestar and the Knight Stallion. Yumna is considered one of the most renowned Pakistani actresses today. She’s been in a number of hit dramas that played on major Pakistani TV channels and has now won the title of Best Actress at the Lux Style Awards for her work in Pyar Ke Sadqay. Moreover, she is regarded as one of the most popular Pakistani celebrities in the entertainment industry.

It is true that Yumna Zaidi has played a leading role in some of Lollywood’s most amazing productions until now! A few months ago, she appeared in the drama serial Sinf-e-Aahan, a drama series produced by the ISPR in conjunction with an impressive cast. It is hard to ignore the actress’ stunning looks and her excellent performance skills in the drama which make a superb combination!

However, she is so different on television screens. The actress has received ample appreciation from critics, friends, and even fans! Yumna has also become one of Pakistan’s top trends on Twitter and Youtube. In addition to all these accomplishments, she is winning hearts as a queen with 5.8 million Instagram followers.

Yumna Zaidi in Crestar and The Knight Stallion – Watch Trailer

Recently, however, an unexpected, as well as an exciting piece of news has come to light. There’s an Arabian superhero web series about to air. It’s natural for you to ask; what in the world does that foreign television show, with what it’s all about, have to do with Yumna? Here’s the thing, It has been confirmed that Yumna Zaidi will play a leading role in the series mentioned above.

I am very excited to let you all know that the official trailer of the series just got released on YouTube a couple of days ago! After watching the trailer, I would describe the series as a mixture of desi comedy and a typical superhero action web series. Check out the trailer found below! 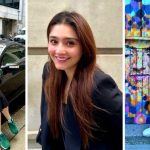